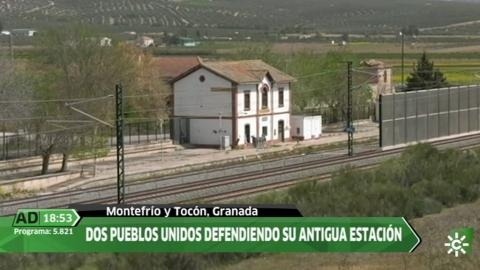 The tender for the demolition works of the Tocón-Montefrío train station, in the province of Granada, put the Íllora Town Council and citizens on alert. At the end of March they started a campaign in networks and collecting signatures with the support of the neighbours and the Montefrío Town Council to save a station that has a great sentimental and symbolic value for these villages.
The century-old train station was inaugurated in 1910 by King Alfonso XIII . In 1999 the line was closed. The railway station could be seen as something like "the town square, through which everything passed", according to the locals. As the mayor of Montefrío explains "this building has always been a meeting place for several generations of people from Montefrío and Montefrío, who have travelled by train to Granada to do business or go to the doctor. The train station is part of our history, and we could not allow it to be lost forever".

The mobilisation and protests of citizens in the municipalities of Íllora and Montefrío, has led ADIF's Heritage department to announce that the demolition has been called off and that negotiations have begun with the town council of Íllora for the transfer of the building.
ADIF(Administrador de Infraestructuras Ferroviarias) is the Spanish state-owned railway infrastructure manager, charged with the management of most of Spain's railway infrastructure, that is the track, signaling and stations.

"We are infinitely satisfied with this announcement, which shows that the mobilisation of the residents of Íllora and Montefrío has had an immediate effect," said the Mayor of Íllora, Antonio Salazar. "The building is in good condition, and only needs repairs to the roof"
The Íllora Town Council has asked the Ministry of Transport, Mobility and Urban Agenda to cede this building to them in order to build an ethnographic museum and give it a cultural use. "We are willing to pay a monthly rent and take charge of its maintenance, as ADIF is asking us to do".